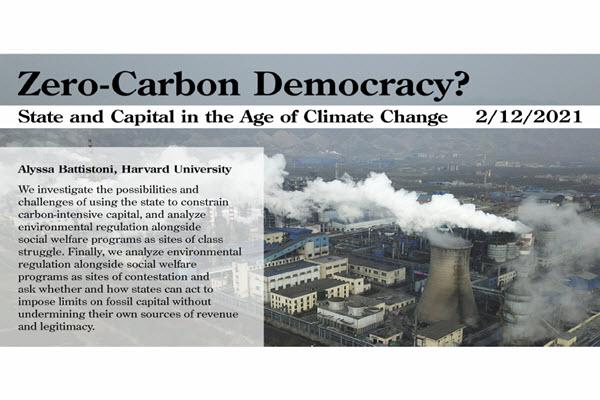 The emergence of climate change as a political issue coincides almost exactly with the period of neoliberal hegemony. Consequently, the role of the state in addressing climate change has been envisioned as a minimal one: states are expected only to “correct market failures.” The failure of these approaches suggests that more robust state action is needed. Yet thus far, most states have acted more vigorously to protect fossil capital and advance carbon-intensive growth than to implement even market-based climate policies. This paper begins from the premise that environmental harms must be understood as sites of class struggle: what mainstream economics describes as “externalities” represent instances where capital foists the costs of production onto society and environment. From this starting point, the paper investigates the possibilities and challenges of using the state to constrain carbon-intensive capital. First, I consider the potential sources of political agency demanding such constraints, drawing on but updating the insights of Marxist state theory. While thinkers in the 1970s often counterposed traditional “workers’ parties”—mass organizations representing the (industrial) working class and focusing on issues at the site of production—with “new social movements” (NSM) organizing cross-class movements around ecological, feminist, and antiracist issues, I argue that political organizing both inside and outside sites of production must be understood as interrelated challenges to capital, drawing attention in particular to the preponderance of contemporary struggles over socio-ecological reproduction. Second, I take up James O’Connor’s analysis of the “fiscal crisis of the state” with particular attention to his read of the “social expenses of environmental pollution,” analyzing environmental regulation alongside social welfare programs as sites of contestation and asking whether and how states can act to impose limits on fossil capital without undermining their own sources of revenue and legitimacy.