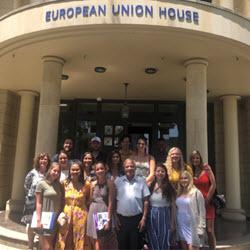 OSU Mansfield professor Stavros Constantinou and his study abroad class, Geog 3753.02, Geography of the European Union on the steps of the EU offices in Nicosia, Cyprus.

Stavros Constantinou led a group of 15 students on the second Geography of the European Union (Geog 3753.02) Education Abroad course in Cyprus from May 4 to June 1. In addition to formal classroom presentations, students had the opportunity to participate in a variety of structured educational activities, including visiting the UNESCO World Heritage Archaeological Park, and the wilderness area of the Akamas Peninsula. They also got the chance to walk along the Green Line dividing the Republic of Cyprus from the Turkish occupied area.

Deondre Smiles has recently been elected to a two-year term as the Vice Chairperson of the AAG's Indigenous Peoples' Specialty Group.

Deondre Smiles also recently had an article accepted to the International Journal of Listening as part of a special issue on ethics and listening. The article, titled "Listening to Native Radio", explores the ways that tribal radio stations in Minnesota serve both Native American and non-Native listeners.

Yongha Park (PhD, Geography, 2017) has received a position as a government researcher at The Korea Transport Institute, an official research agency for the Korea government. The position will be in the Department of Aviation, building on his expertise in aircraft efficiency and network configuration by airlines.