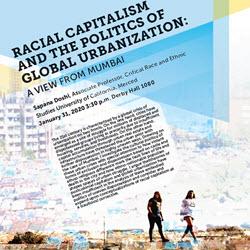 Racial Capitalism and the politics of Global Urbanization, A View from Mumbai.pdf

Title: Racial Capitalism and the Politics of Global Urbanization: A View from Mumbai

Abstract: The 21st century is characterized by a global crisis of urbanization on two fronts. On the one hand, cities have emerged as a site of struggle for millions of displaced and dispossessed groups living in precarity due to insufficient housing, services, and livelihoods. On the other hand, capital accumulation through urban real estate and infrastructure have threatened the urban poor with further dispossession in highly uneven ways. Drawing on the case of Mumbai, I investigate the cultural politics of these urban crises with special attention to how violent forms of exclusion and dispossession based on caste and ethno-religious difference mark the fault lines of life and death in the city and how ethno-nationalist populism shapes spaces of urban struggle. I argue that theories of postcolonial capitalism and global urbanization have been insufficient in the analysis of these embodied politics of uneven dispossession and consider and expand upon conceptualizations of racial capitalism as a (cautious) corrective.